This blog was created to help educate the public on why Trump Must Go.

Now that Trump will soon be gone, hopefully for good, it is time for it to come to an end.

But our work is not done.  Going forward –

* We must remain vigilant so that someone like Trump - ignorant, incompetent, racist, delusional, demented, totally self-absorbed, completely devoid of humanity, and totally unfit, practically and mentally, to hold any office of power at any level - never ends up in the White House again.

* True conservatives and traditional Republicans need to make sure that the Republican Party is purged of "Trumpism" and that the Party's nominee for President in 2024 is a Romney, a Kasich, a Weld, or anyone who will vocally and aggressively disavow and denounce Trump and everything Trump represents.

* And Trump must be investigated, indicted, prosecuted, convicted, and incarcerated for his multitude of crimes. 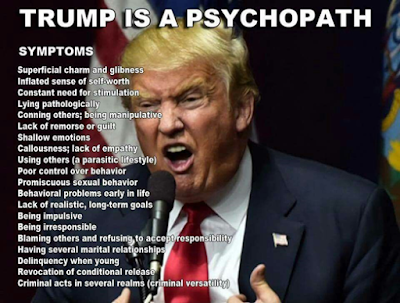 TRUMP IS A PSYCOPATH

Clinical Psychologist Alan Blotcky and Psychologist Seth Norrholm tell it like it is in the NY Daily News “Say it Plainly: The President is a Psychopath”.

We certainly know that he is a sociopath.

“He breaks norms, rules, and laws with impunity.

He has been accused of sexually predatory behavior by at least 25 women.

He blames, scapegoats and gaslights as easily as he breathes.

He undermines the vital role of the free press because he abhors oversight and accountability.

His lies and anti-scientific advice and intentional downplaying of the coronavirus pandemic has led to countless American deaths.

He is callous and cold and unfeeling because he has no conscience.

He denigrates and humiliates anyone and everyone in his path.

He has no respect for military heroes or renowned experts.

He is racist and xenophobic.

He incites violence and culture wars.

He is obsessed with power and adoration.

He is a greedy opportunist.

He is corrupt to the core.”

And they end with –

“Trump is the most psychiatrically disordered president in history.

Donald Trump is dishonest and destructive and evil. He has become embolden and empowered by the complicity of his Republican sycophants. Sadly, he now believes he is destined to carry on his mission. He feels unstoppable. And he must be stopped before it is too late.”

Nothing is more important in 2020 than removing this psychopath and sociopath from the White House!

Posted by Robert D Flach at 2:10 AM No comments: